In the middle of Polish Nowy Teatr's performance of Hanoch Levin's play Orzei Mizvadot (Suitcase Packers), an American lady visiting Warsaw asks why everyone says they want to leave. The widow Bianca responds to her question with an angry account of how Poland's Jews - her family - were wound up in the Warsaw ghetto during WWII while others escaped to the country and gave farmers their gold for bread. The few who survived the Holocaust had to sell out their looted homes and go into exile. Her outburst is conjuring the new law restricting public debate on the involvement of Poles in the persecutions of Jews. "Therefore, everyone wants to travel," says Bianca.

This dialogue is a supplement inserted into Krzysztof Warlikowski's production of the play, which in his and Piotr Gruszczynsky's adaptation is presented with the more edgy title Wyjeżdżamy, We Are Leaving. The play, written in 1983 by Israel's most renowned dramatist, is transplanted into Poland today, describing a depressed, frustrated mood in a city neighbourhood. The inhabitants long for meaningful lives and big projects, drag around suitcases and declare themselves on their way. But their proud plans are undermined by compelling family ties and banal routines. Most of the characters are dying, one by one, without having gone to the United States, Switzerland or the mythologized "Europe" they dream about.

The interpretation of We Are Leaving is a topical example of how contemporary Polish theatre comments on the current social climate, where many worry about how freedom of expression and participation in the EU may be limited by the PiS government. After 1989, the performing arts have created important platforms for democratic reflection, but the freedom of theatres is also threatened by cultural policy demands for repertoire that honour traditional Polish values ​​and nationalism. The instruments used are appointments of government-friendly artistic directors and/or withdrawn subsidies for those who do not comply with the agenda. "We are off, we are leaving Poland", therefore today is a resigned statement among certain Warsaw artists and intellectuals.

Krzysztof Warlikowski (born 1962) is one of the central advocates for free, critical performing arts. Warlikowski is the artistic director of the Nowy Teatr and has been an internationally acclaimed front figure for Polish theatre over the last 20 years. In his profound, multi-dimensional plays, composed with his artistic team and a tight ensemble, Warlikowski has broken traditional taboos to define post-communist Poland and its social culture in a contemporary, multifaceted Europe.

Warlikowski has been particularly concerned about highlighting anti-Semitism and recognizing individuals' rights and freedoms. LGBTQI issues are actively put forward in his shows, through manifest gay relations, queer expressions and non-binary gender identities. All this permeates large, composite works such as A(pollonia), Kabaret Warszawski and Francuzi, which critically question normative structures and ideals in Western culture.

Nowy Teatr works actively with European networks and co-productions and has become a hub in the Polish theatre milieu. Together with three other theatres and European festivals, Nowy produces the leading director Krystian Lupa's superb but politically controversial interpretation of Kafka's The Trial. This stage adaptation applies the accused Josef K's struggle against an incomprehensible judicial system on Poland, where recent government legislation has restricted the political independence of the administration of justice. Lupa initiates a discussion about the responsibility of artists and intellectuals. In a newly written monologue, he makes Kafka's friend, author Max Brod, ponder over the situation. Brod fears that we stop resisting when the line of absurdity has been exceeded, and he concludes, directly alluding to Poland, that this limit has now been passed.

Other, younger stage auteurs counter the government's nostalgic, national conservative cultural agenda with productions that deal with philosophical issues. Natalia Korczakowska stages an adaptation of Dostoevsky's Demons at the Studio Teatrgaleria. The characters discuss how freedom and free will in a world without God can be turned destructively against man and lead to despotism. At the Nowy Teatr, Krzysztof Garbaczewsky's stage adaptation of Plato's Symposion becomes an original, lustful meditation on how love and eros can generate beauty and true knowledge. Particularly memorable is the famous apology of Socrates, delivered by a naked Jacek Poniedzialek in an attitude of sincere, contemplative reasoning, appealing to the common sense of the audience.

Director Maja Kleczewska has brought attention to Elfriede Jelinek's Fury at the Powszechny Teatr, which in an explosive stage expression rages against European and Polish refugee politics. The Powszechny is furthermore part of the EU project Atlas of Transitions (which also includes the Backa Theater), conducting artistic research on issues relating to migration and new identities in Europe.

Leading Polish theatre directors thus create new work rooted in awareness, self criticism and investigation in order to promote the open dialogue that is vital to democracy. The idea of escape is also not seen as constructive. In the program of We Are Leaving Krzysztof Warlikowski emphasizes that he is not considering leaving Poland, as long as he has the Nowy Teatr and his "family" – the artistic collaborators. In his performance there is also a monologue (extracted from a sketch by Hanoch Levin) where the illusions of a dynamic Europe are cut short: A woman returns from a journey telling about endless visits to churches, museums and beautiful lakes. "Europe" appears as a museum of its own past, devoid of exciting visions for the future.

To Krzysztof Warlikowski and his colleagues, the theatre is a place where they seek to express how the Polish people may cooperate and act together in a new, socially diverse community. But We Are Leaving also points to how fragile everything is. Each time a character dies, a projection shows a memorial image of the actor in younger years. A text indicates the actor's birth and fictional death dates. That is a reminder that the theatre's artists are vulnerable and mortal. It is here and now that we can meet them and act upon the freedom they articulate. 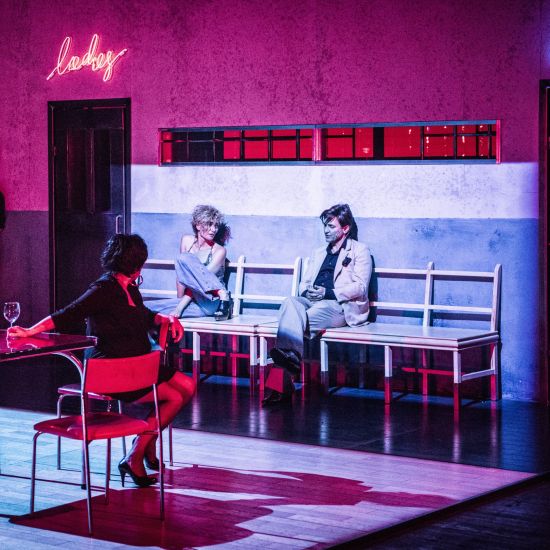 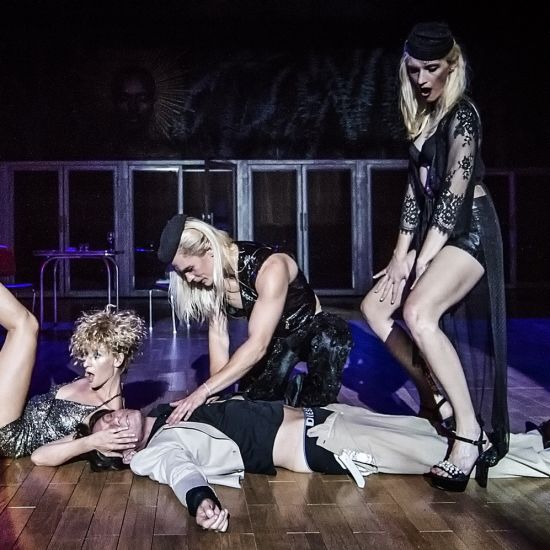